Half Batch Brewing, Hendersonville, TN’s first and only craft brewery, is located just 20 minutes north of Nashville. You can find our brewery and public room in the Hazel Path Center, at the intersection of Main St and Bonita Pkwy.

Half Batch was founded on the desire to bring people together to enjoy great beer brewed in Sumner County. We want beer lovers looking for a cozy, relaxed atmosphere to have a place to gather. Come in for a pint when you’re in town. If you can’t be here with us, then we hope that wherever you are, you can enjoy a fresh Half Batch beer. Cheers!

Half Batch Brewing was a long time in the making for founder Nate Newton. Born from his first homebrewing experiments while in college in the mid 1990’s, Half Batch officially began brewing beer in Hendersonville in the summer of 2017.  The public room opened in the fall of that year. Beer lovers have quickly learned about Half Batch Brewing’s unique offerings. Today, visitors from all over the world stop by the Half Batch Brewing public room to sip on delicious brews created right in Sumner County!

Our goal is simple:

What’s with the donkey?

Yes, all of the above.

It started with a unofficial motto of sorts – ‘Never Half Ass’. It’s something we at Half Batch Brewing aspire to: to do our best every chance we get. We work hard to be sure we have no regrets. We thought it would be funny to have a logo to go along with that ‘motto’ showing half of a donkey with a line cancelling it out. We liked that logo, and we really liked that donkey. A lot.

Next, a classic British bitter was brewed. Our brewers wanted a flavorful but low alcohol beer styled after the pub ales of Britain. A beer for quenching one’s thirst after a long hot day in the brewery. So they brewed one. We wanted to give the beer a name that sounded like a silly British nickname.  We came up with Cheeky Pete. That name stuck for the beer. Then, we started to call the donkey in the ‘Never Half Ass’ logo Cheeky Pete. That name also stuck for the donkey, and a brewery mascot was born.

So, what, or who, is Cheeky Pete? Well, it’s a full flavor session-able ale that you sometimes find outside of the public room, but which is always on tap in the public room. It’s also Half Batch Brewing’s donkey mascot. If you are lucky, you may catch Cheeky Pete at a Half Batch event. Sometimes he stops by the public room on a Friday night to tap a special cask.

"This is about our 4th time here. We love our backyard brewery! They do such a great job. We love the staff! Nick is one of our favorites! You've got to go check it out!"

"Quality craft beer a knowledgeable and friendly staff. A must go to brewery."

It's Saturday and we are ready to ROCK! 🎸 We're

We've got that Friday feeling and we are ready to

Thursday night is upon us, which means Trivia Nigh

We've got 2 exciting shows coming up this weekend!

Do you like new things? Here are a couple of new t

COME FOR THE BEER, STAY FOR THE FUN

Come have a beer with us! 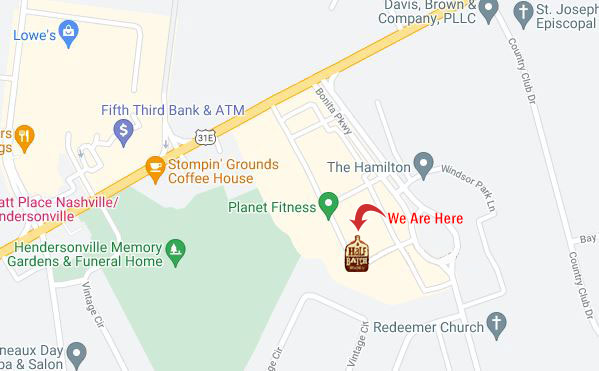 Half Batch Brewing is moving to a new location soon!

Don’t worry! We’re not going far. We can’t wait to welcome you all to our new space located just a few doors down from our current location. Construction will begin soon on a new building that will be the new home of Half Batch Brewing. The new spot will have an expanded (but still cozy) public room, an outdoor beer garden, and much more room for brewing! It’s going to be awesome!

Follow us on social media for updates! In the meantime, visit us at our current location where you can enjoy great craft beer brewed right here in Hendersonville, TN. Cheers!

KEEP UP WITH THE NEWS. SIGN UP FOR OUR NEWSLETTER!